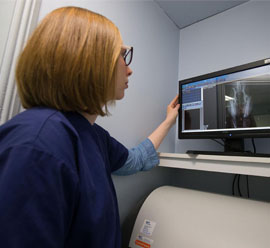 Áine is from Co. Mayo and worked there for a year after qualifying from UCD in 2006. She soon moved to the UK where she gained invaluable small animal surgical and medicine skills. Áine then moved home to Ireland in 2009 and joined the Treaty Team! She married her husband, Eamon, in 2010, who is also a veterinary surgeon and they now live near Birdhill with their two sons, Rory & Pierce, their two rescue dogs Suzie and Cusco and their two rescue cats, Izzy and Blitz! We are hoping Eamon has convinced her to stay close by, but lucky for us they seem to be settling in nicely with a variety of farm animals too, including their cows, their two donkeys, Big Momma and Chocco and their recently rescued (and almost featherless!) battery hens, Laurrette, Josephine and Gráinne! Áine has proven to be a very valuable asset to Treaty and although she very much enjoys surgery, she also has a keen interest in the treatment of exotic animals and small furries such as rabbits, hamsters, rats and pygmy hedgehogs!