Meet Ted! Ted is a terrier cross who was abandoned at the side of a busy road where he was hit by numerous cars. As you can see from his x-rays, Ted suffered severe injuries to his pelvis and had a broken hip, which required numerous surgeries to repair.  Attached image of x-ray. We were unsure if Ted would ever regain the use of his back legs, but he always had a positive outlook! Ted had daily physiotherapy for weeks and a lot of TLC from our nursing team. Despite the pain he must have been in, he never complained once, made a great recovery and got a fantastic new home where he now lives with his best friend Toby and his favourite human, Grace! 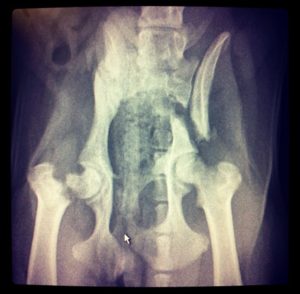 3 years later Ted is a cheeky chap who spends his days chasing birds, cats and any other fast moving animal he can find! Despite his bad start to life, Ted always adored people and never held a grudge after being abandoned at the side of the road.